Encore: how the music played through disruption

Rob Nassif remembers a time when it was simple.

As the drummer in popular Australian band Gyroscope during the early 2000s, the music industry was pure black and white.

“You’d just slug it out for years and years playing gigs hoping to get signed,” Nassif, now 37, says from his new home in New York.

And they did well.

After years living off $200 a week, the band “made it” at a time when money – good money – could flow from compact disc sales and tickets to gigs. Revenue streams such as merchandise were the cherry on top. For the record labels it was a financial goldmine.

But similar to the newspaper industry, the rivers of gold wouldn’t last. Napster, iTunes and streaming services such as Spotify – which is set to list on the US stockmarket – led a well-documented and brutal revolution that consigned the industry to the history books as one of the first to feel the full disruptive force of the internet and technological advancement.

Yet the music hasn’t stopped. Artists still emerge. In some ways, the music industry is today a hardened soldier or perfect case study for the many incumbent companies staring down the barrel at increasing disruption from new technology-enabled players.

“It’s been totally flipped on its head,” says Nassif of 2018, where you’re more likely to hear about “blockchain” and “synching” than “sex, drugs and rock ‘n roll”.

“Obviously being able to write a good tune is, and always will be, the most important thing.

“But today there are so many elements, in a business sense, that artists need to be across. And it all changes so quickly – it’s crazy.”

In 2007, when the CD was still king, physical sales made up $422 million of annual revenue, compared to a puny $39m from digital sales. A decade later it had flipped as digital sales made up 70 per cent of revenue in 2016, or about $246m. Streaming revenue – which didn’t exist five years ago – made up $135m of that.

Industry insiders suggests the 2017 figures, due out later this month, will show an even greater shift towards non-physical sales as streaming – which includes Spotify, You Tube and platforms such as Apple Music – takes an increasingly bigger chunk of the pie.

In the global market, the trend is even more severe. 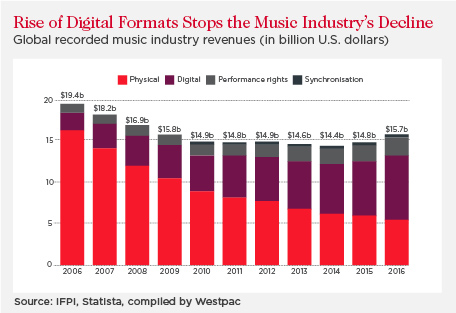 In many ways, Spotify exemplifies the change.

According to documents filed by the Swedish company last month ahead of its planned US float, private trades recently valued the business – which only launched in Australia in 2012 – as high as $US23 billion ($29.7 billion) on revenue of $US4.6bn in 2017, making it, arguably, the most valuable “music label” in the world.

In the US, streaming is the most common way consumers listen to music, and has been for the past two years.

In a recent report Goldman Sachs predicted the recording industry will blow past its CD-era peaks and quintuple in revenue to almost $US41bn worldwide by 2030, mostly thanks to streaming – a huge rebound that suggests arguments over whether streaming is good or bad may soon be inconsequential.

But there is a catch.

With streaming services such as Spotify paying artists 0.005 cents per stream, and streaming becoming the norm for consumers, how do artists who aren’t Ed Sheeran or Taylor Swift make a buck?

According to Australian artist Abbe May, live gigs are more important than ever.

“My main source of income is through live shows,” May, a professional musician for more than a decade, says.

“I no longer make much money through record sales. And in the wake of free streaming, musicians need fans to buy tickets to shows in order for them to continue to make music. And I have a really loyal following of music lovers who consistently show they understand that.”

Other artists suggest they’re in similar situations – making roughly 60-70 per cent of income from live shows – and have been for most of the past decade.

Yet there are other, more technical, elements emerging as ways for musicians to keep their heads above water.

“Synching”, an industry term for publishing rights (songs used in movies, video games and advertisements), is making up a greater chunk of the revenue pie.

In 2018, the phrase “sell-out” doesn’t exist – if you get your song on an advertisement or included in a popular video game, it is lauded as a great achievement, the modern equivalent of Molly Meldrum telling Countdown viewers to “do yourself a favour”.

Even the financial services industry’s buzzword of 2017, blockchain, has seeped into the music space.

The distributed ledger technology is lauded by some industry insiders as a new way to help artists sell their music directly to fans (ideally using cryptocurrencies) with smart contracts instantly splitting and paying royalties. It would mean “middlemen” such as labels, publishers, or collecting societies, would become irrelevant.

The industry also lacks a single global database to correlate information from the recording and publishing sides of the music industry. Right now that is handled by a handful of operators, known as “neighbouring rights businesses”, that correlate data about when and where an artists’ music has been played, so they can be paid royalties.

But the business model is both costly and inefficient.

Blockchain is seen as a system which could solve the problem, bringing money straight to the artist.

West Australian Music chief executive Mike Harris says while the “jury is still out” on blockchain, it’s discussed at every music conference across the world these days.

More broadly, he says that even though the modern music business is more complicated than ever, the environment has actually never been better.

“I may be slated for saying that, but I truly believe it,” he says.

“You’re not selling CDs for $30 anymore, but you can put your product out there across the world at the drop of a hat. And you can be a global megastar from anywhere. Although you may be competing with that punk band from Kazakhstan for your audience these days, if you have savviness and you’re prepared to market it, it’s there to be taken.”

Yet despite all its complications, there is one basic element of the digital world that every band, musician or artist can use to promote themselves.

These four early 20-somethings from Nassif’s home town of Perth epitomise what it takes to “make it” in the modern age.

The boys have a daily schedule of tasks their label, BMG, sends through every morning.

It has ideas for social media posts, an itinerary and various other tasks they should try and complete.  But for The Faim, social media is the key.

“When we were starting out we filmed 15-second covers of songs, and then shared them on the fan pages of the bands we were covering,” the Faim’s guitarist Michael Bono explains in an interview before the band’s almost daily rehearsals.

“It helped grow our social media following, which is pretty important these days.”

So-much-so the band generated 30,000 Instagram followers before they even released a song of their own.

“We saw the effect we were getting from social media,” bassists Stephen Beerkins adds.

“Some days we were getting 500 followers on our Instagram account, and it’s like why would we fly to the eastern states, travel up and down the coast playing shows when we can stay at home, promote ourselves, save money and gain followers that way.

“We have a huge followings in Brazil and London, and next month we have our first show outside of Perth, and it’s in London.

“With this generation we all live on our phones, rightly or wrongly, and social media it’s just an obvious way to get that following, all across the world.”

Venture capitalist Danny Gilligan says other industries can learn “a lot” from the music business’ digital disruption, pointing to how the consumer value proposition and competitive dynamics in a market can be totally turned on its head.

“Digital opens up new means of distribution, including globally – Spotify gets an artist everyone at once, whereas previously physical sales were geographically bound,” says Gilligan, a co-founder of Westpac-backed venture capital firm Reinventure.

“Media/promotion are also now on global platforms, so this means opportunities are bigger for good artists but you now compete on a global scale , which sounds like journalism, ecommerce etc right?

“And there are very similar patterns happening elsewhere and a lot to learn from music for other industries.”