In the 1960s, US President Lyndon Johnson oversaw a period of fiscal stimulus when the economy had strong momentum and was already at full employment.

Today, we’re arguably seeing the most similar comparable policy “mix” in the US since LBJ’s time as taxes are cut and spending increased when the unemployment rate has already fallen to 4.1 per cent and is going lower.

On top of the recently approved cut in the US corporate tax rate to 21 per cent – part of a tax package estimated to cost $US1.5 trillion over 10 years – Congress has supported a $US300 billion federal spending package over 18 months from April 2018. 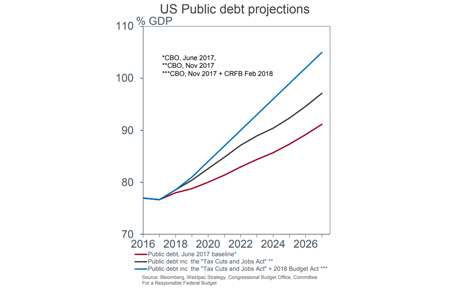 Put simply, this recent change in US fiscal policy has been significant, and prompted us to adjust forecasts in turn.

But the stimulatory fiscal policy is also spurring increasing debate about the risks of overheating an already strong economy.

Travelling in the US in the past two weeks, this was one of the key themes from discussions with real money managers, economists and some officials – whether this major fiscal stimulus was ill-timed given the risks to financial stability of overheating an economy already enjoying rising momentum and boasting an unemployment rate of 4.1 per cent. 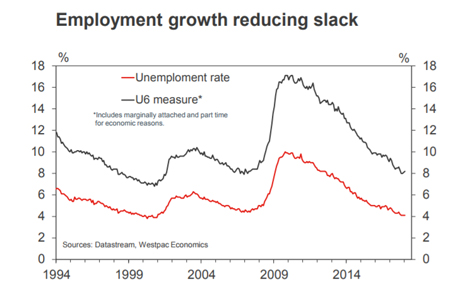 So it wasn’t surprising to see the spike in equity market volatility in recent weeks as participants adjust to fiscal policy arguably not seen since the 1960s and what that means for inflation.

In the short to medium term, the new spending package has led us to raise our US GDP forecasts to 3 per cent and 2.5 per cent for 2018 and 2019, respectively. Our forecast for the US 10 year bond rate – one of the key interest rates globally – by year’s end has thus also lifted to 3.35 per cent on stronger growth and inflation. As many commentators have discussed, rising fiscal deficits will also lead to more bond issuance and higher rates. 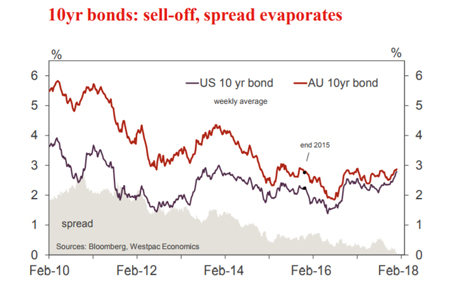 But with the US jobless rate likely to have a “3” in front of it by the end of the year, the associated tightening in financial conditions from higher rates is unlikely to slow momentum in the economy enough to allow the Federal Reserve to stop hiking official rates by year’s end. Thus, we now expect two further hikes (in March and June) FED in 2019, taking The Federal Funds rate to 2.625 per cent.

What does this mean for Australia?

Well, for growth, probably not much. Stronger US growth does translate to upside risks to our 2.5 per cent forecast for Australian GDP growth in 2018 and 2019. But I would be surprised if growth is pushed above the “potential” rate of 2.75 per cent, remembering that the expected slowdown in China’s economy is much more important to Australia.

For financial markets and economic historians, the changes in the US could be far more profound. Based on our forecast that the RBA remains on hold at 1.5 per cent and the US Federal Funds rate hits 2.625 per cent, then the differential will reach negative 112 basis points by June 2019.

That is unchartered territory with the previous “record” being negative 50 basis points in the late 1990’s.

More volatility in markets is likely along the way, including in equities and foreign exchange.

While the RBA is emphasising “progress in reducing unemployment and having inflation return to the mid-point of the target range”, the bank has also noted that just as the cash rate didn’t “move lock step on the way down” with other countries “we don’t need to do so in the other direction”.

It’s also worth noting that with underlying inflation expected to hold at or below the bottom of the RBA’s 2–3 per cent target band for 2018 and 2019, that would make five consecutive years below the desired range, which arguably represents a structural fall in inflation that has not been addressed more aggressively with even lower rates due to concerns around housing markets.

We have no reason to change our view of steady rates over the next few years.

This article is general commentary and is not intended as financial advice, and should not be relied upon as such.