But longer term, Australia’s housing returns stack up less favourably compared to several other advanced countries, a new study from 1870 to 2015 has found.

Finland topped the table with an annual real rate of return from housing of 9.58 per cent, followed by fellow Nordic countries Sweden and Denmark at 8.3 per cent and 8.03 per cent, respectively, according to self-described world-first research from economists at the Federal Reserve Bank of San Francisco.

Australian housing delivered 6.37 per cent, 10th out of 16 countries. Returns were stronger in periods post 1950 and 1980, at 8.29 per cent and 7.16 per cent, respectively; suggesting weakness in the first half of the century lowered the overall result. Italian housing performed the worst at an annual return of 4.77 per cent. Although since 1980, Japan’s housing was found to have delivered an even weaker 3.58 per cent.

The paper, titled “The Rate of Return on Everything”, covers 16 advanced economies and the four major asset classes of equities, housing, government bonds and bills, albeit over slightly different time periods. For example, Australia’s housing returns are from 1901-2015, whereas Finland’s was from 1920-2015 and the US from 1891-2015, which delivered a return of 6.03 per cent. 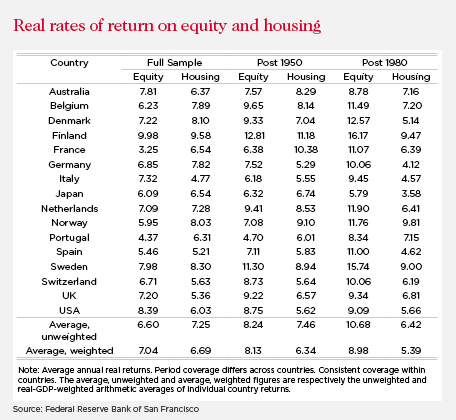 The authors claim that the findings challenge traditional assumptions and mark the first-ever analysis of long-term total returns from housing, based on prior work on house prices and new data on rents.

“Residential real estate is the main asset in most household portfolios…but so far very little has been known about long-run returns on housing,” the paper states, adding housing wealth was on average roughly one half of national wealth in a typical economy. Australian residential property is worth $6.8 trillion, according to the Australian Bureau of Statistics.

Overall, the Federal Reserve Bank of San Francisco paper found that residential real estate and equities have delivered similar “high real total” annual gains of about 7 per cent, on average, split by housing outperformance prior to World War II and then equity – or stocks – performing better since, albeit with greater volatility.

This surprised the economists and raised questions around the risk and return investors were ascribing to assets: “The observation that housing returns are similar to equity returns, yet considerably less volatile, is puzzling. Diversification with real estate is admittedly harder than with equities.”

“This finding appears to contradict one of the basic assumptions of modern valuation models: higher risks should come with higher rewards,” the economists say, labelling this the key finding of their research “that was completely unknown until now”.

“Residential real estate, not equity, has been the best long-run investment over the course of modern history.

Others have come to similar conclusions. In October, The Bank for International Settlements found house price “upswings” in advanced economies were more common and longer, led by Australia’s one that was “still continuing after half a century”.

World War II from 1939-45 was, however, a defining time. Prior to the war, real returns on housing, equities and safe assets like bonds followed “remarkably similar trajectories”. After the war, “this was no longer the case” and in recent decades, equities have slightly outperformed housing on average, but suffered greater volatility and far more “pronounced global boom-bust cycles”. 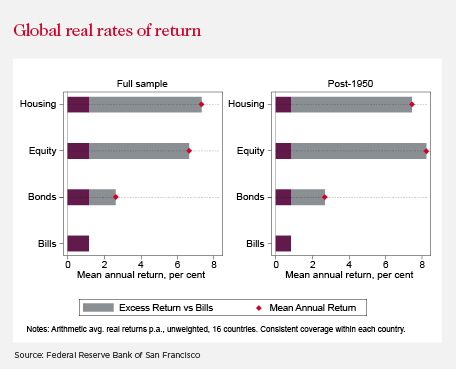 The findings come amid ongoing debate in Australia about the housing market. Researcher CoreLogic this month said national dwelling values fell 0.3 per cent the past quarter, led by falls in Sydney. Prices, however, remain more than 70 per cent higher since 2012. CoreLogic head of research Tim Lawless said he expected a “slower but still relatively active” national housing market this year amid more cautious buyers, regulator vigilance and ongoing low interest rates.

Optimism also abounds for another positive year for equity returns on the back of strong global growth and firmer commodity prices, building on the 2017 gain in Australia of 11.8 per cent including dividends. “We expect continued low yields, combined with good global growth and the boost to after tax profitability from the Trump tax cuts, to continue to support asset prices,” Macquarie equity analysts wrote this week.

Globally in the past 150 years, the Federal Reserve Bank of San Francisco economists summed up of housing and equities: “Long-run risky asset returns for most countries are close to 6–8 per cent per year, a figure which we think represents a robust and strong real return to risky capital.” Government bonds and bills returned less than 3 per cent.

They also touched on the heightened debate about inequality as asset prices grow faster than economies, noting that a “robust finding” in their paper was that globally the “weighted rate of return on capital was twice as high as the growth rate in the past 150 years”.

This article is general commentary and it is not intended as financial advice and should not be relied upon as such.