Competitive trading conditions have registered bumpy returns for Australia's wine industry. But a flurry of promotional roadshows and the positive effect of new free trade agreements are set to bring back the 'cheers'.

"Challenging" is how Wine Australia's Acting Chief Executive, Andreas Clark, has described the current state of the wine market. Based on reduced export volumes, especially for bottled wines, which dropped 8 per cent in the past year, the mood is not as celebratory as it could be. Higher prices managed to generally offset reduced volumes of bottled wine; however, bulk wine exports have not fared so well, despite declining at a slower rate than bottled wines.

The UK market stood out with bulk wine selling at $1.06 per litre.Clark says 2013 was significant because export performances varied even within markets due to differing demand across the upper and lower end of the quality scale: "For example, in the UK roughly half of the Australian wine exporters increased the value of their exports while the other half experienced declines."

Despite increased Australian production, total export volume dropped 6 per cent during 2013 to 698 million litres, registering a value of $1.76 billion, which placed Australia fifth in the world in terms of volume and value.

Clark noted that oversupply had been an issue in the past, but at this stage "we are approaching a more balanced position at an aggregate level". He says further adjustment was required within the different sub-categories of wine.

Sales volume decline was predominantly at the lower end of the market: exports valued at less than $5 per litre declined 7 per cent to 610 million litres. 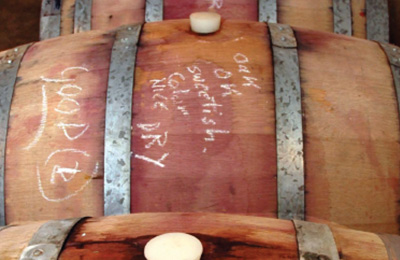 Exports valued at more than $5 per litre increased marginally to 68 million litres. Of these, the $10-$11.99 per litre segment held the greatest share at 34 per cent, but the $20-$49.99 per litre segment, accounting for only 25 per cent, was the most valuable. Clark says the lower Australian dollar had been of some help to exporters, but that it would be risky to rely on it as a driving factor for future trade.

"This is not a panacea and we cannot pin all of our hopes for a market turnaround on something that we have no control over," he says.

"Instead, the sector needs to focus on long-term, consistent investment in activities that build the reputation of the category in our major markets. The industry is working collectively to ensure there is greater awareness around the world of the quality, diversity and regionality of Australian wine, to help improve returns for grapegrowers, winemakers and all in the value chain."

Clark is "cautiously optimistic" in light of recent promotional activities embraced both locally and internationally.

The Savour Australia 2013 campaign was the first global Australian wine forum. Other significant promotional events included the Australia Day Tasting in London and the Grand Tasting Roadshow held across China in April.

Notwithstanding the difficult trading environment,

There's a lot of positive sentiment about Australian wine in all our export markets following Savour Australia 2013.

Australia's top five international wine destinations by volume in 2013 were the UK, US, Canada, China and Germany. Four of these markets, however, experienced a reduction in volumes exported over 2013 compared with the previous financial year.

The only market in which Australian wine sales increased in both price and volume was Canada, bringing in $174 million for Australia's 242 exporters. Exports to Canada increased by 7 per cent to 51 million litres, largely due to bulk wine, which now makes up more than 40 per cent of that market. The average value of bottled exports increased 1 per cent to $5.11 per litre. Despite the reduced volume to the other markets, value was redeemed by increases in price, which meant that overall export incomes increased, albeit marginally.

Dragging the chain were red wines, which saw an 11 per cent drop in exports to 382 million litres, compared with the 2 per cent increase in white wine exports. The decline in red wine exports was attributed to several factors, including decreased demand for red wine globally.

"This was in keeping with a slowdown in the imported wine market across the board, mainly due to the austerity measures introduced by the Chinese Government at the end of 2012 to curb spending by government bodies on luxury goods such as premium imported wines," says Clark.

Despite this, Australia remains well placed in China, second behind France, and is achieving the highest average value among the top 10 importing countries. China remains the biggest destination for Australia's premium wines above $7.50 per litre.

An anticipated free trade agreement (FTA) with China and the positive flow-through effects from the recent ratification of the FTA with South Korea and Japan are expected to benefit the Australian exports market as these regions increase in wealth and trading relevance.

Korean wine consumption is expanding rapidly as the burgeoning middle class starts to appreciate Australian wine, and Australian winemakers are working hard to capitalise on it. Currently, Australia is ranked sixth (after France, Chile, Italy, the US and Spain) among South Korean imports, by value, with a 5.7 per cent share of total imports. The fall in the retail price due to the elimination of the 15 per cent tariff is expected to stimulate stronger demand for Australian wine.

"Australia has very few trading barriers to entry, whereas many of the markets we export to have many taxes, leaving Australian exporters with an unfair disadvantage. These FTAs will make us more competitive and improve trading conditions," says Clark.

His sentiment was echoed by President of the Winemakers' Federation of Australia, Tony D'Aloisio: "This will result in the elimination of the 15 per cent tariff that Australian wine faces in Korea and Japan. It will bring us into line with our key competitors Chile, the European Union and the US, who pay no import tariff by virtue of their free trade agreements and have gained market share at our expense as a result. We congratulate the Australian Government for bringing these negotiations to a successful conclusion.

"The export market has always been critically important for the Australian wine industry. [In 2013, 60 per cent] of the wine produced in Australia was destined to be exported to other markets."