Footprints to the future

Mention the organisation Landcare, and the image of environmentalists planting trees is the first thing that comes to mind for most people. But Pip Job, CEO of the Little River Landcare Group in central western NSW, is hoping to change that perception with a string of innovative projects that are altering the face of conservation and sustainable farming in Australia.

Job, who has been at the helm of her local Landcare group for the past two years, has been stepping beyond the organisation's usual scope to deliver social programs focused on ensuring the stability, support and mental health of farming families across Australia.

Job is using the bursary she won to create a rural women's training program titled Positive Farming Footprints, which aims to increase the capacity of rural women to manage farm finance and climate change.

The project will develop tools that farming families can use to check the capacity they have to deal with issues related to mental health, succession planning, family communication and isolation. It also aims to provide resources to improve the financial literacy of farming families, to ensure farmers really know what drives their profits.

"Our organisation is based in an area not far from where several farmers took their lives during the peak of the drought as a result of the financial strain they were under," says Job. "The impact on the community was so great that our organisation made a pact that we would not lose another one of our farmers to suicide."

While some people see Landcare as a feel-good organisation concentrated on caring for the land, Job sees its role in caring for people as more important, as the state of the land depends on the health of the communities that tend it. 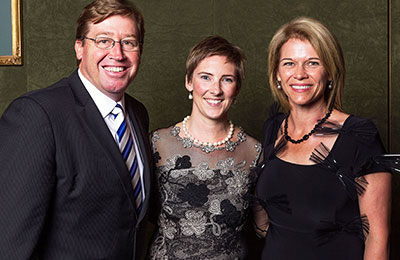 "If we manage the people element better, we'll be able to get them involved in the land care," she says. "So we look at how we can build robust, resilient farming families that can help build our local economy, so we can safeguard agriculture and our rural communities for the long term." This, says Job, is a huge change from where Landcare was when it started 25 years ago.

"Today, Landcare operates in more than an environmental capacity; we work very closely with farmers to help them increase their agricultural production while achieving ecological outcomes at the same time," she says.

Job's passion for promoting natural resources management stems from a belief that modern farms must be run differently from the farms of the past.

"Going back 20 years, women didn't have a voice in this industry," says Job. "They were poorly represented in agriculture and weren't regarded as having any value on boards, which is why awards programs such as this one were started.

"Women have been a really important backbone of agriculture in this nation from the days of the First Fleet, despite a period when women were sort of pushed to the side and gentlemen farmers took over," she says. "Today's Australia is far more accepting of women in diverse roles in agriculture, from getting their hands dirty working in the business, through to sitting on boards representing agriculture.

"Awards like this, along with women's programs, are an important part of recognising the past, what we've advanced from, and what we've been able to achieve."

As this year's winner of the Rural Women's Award, Job received a $10,000 bursary to enable her to further develop her leadership skills, in addition to the $10,000 awarded to her project as part of the NSW state award earlier this year. Be involved.

Partnership for the future

Westpac Agribusiness is the major partner of the RIRDC Rural Women's Award. We believe in investing in the future development and advancement of Australian agriculture and its leaders. Visit rirdc.gov.au/rural-women's-award for more information and past winners.

Landcare has partnered with digital crowdfunding platform Pozible to launch the Landcare & Environment Collection, a platform for environmental projects to raise funds online at pozible.com/landcare. The alliance came in time to celebrate World Environment Day and the 25th anniversary of Landcare.