There's an increasing number of confident, ambitious and passionate young people keen to promote the agriculture industry to their city-dwelling peers. Meet three of these high achievers. 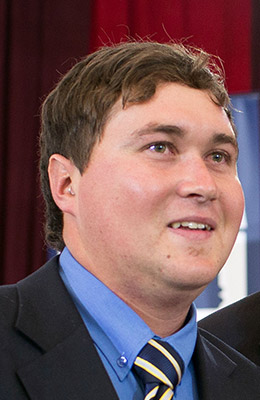 With his booming voice and larrikin charm, Shelby Howard is a constant fixture on Victoria's livestock auction circuit.

The 24-year-old was recently named the 2014 Australian Young Auctioneer at this year's Sydney Royal Easter Show and is set to represent Australia in Calgary, Canada in July at the International Auctioneers Competition.

To clinch the national title, Shelby had to show off his auctioneer skills and agricultural knowledge in front of a crowd of thousands.

"We were judged on diction, pitch, knowledge, clarity and presentation. They were also looking at how we present on the day and how quick we were," he says.

Shelby, who works as a stock agent for Rodwells in Shepparton, said he treated the event like any other auction.

"Every time you get up there you have to treat it like a performance-you've got to perform for your company and for your clients. Every crowd is different and your aim is to engage them and get the best possible outcome for your clients, so that's what I did at the show," Shelby says.

"A lot of what we do as auctioneers comes naturally-you're either born to be an auctioneer or you're not. You have to have a bit of 'oomph' in you."

A country boy at heart, Shelby says he's been on a farm for as long as he can remember.

"I'm really passionate about the agricultural industry and couldn't imagine doing anything else," he says. "Doing what I'm doing and from what I've accomplished so far, I know that I can do anything; the sky's the limit." 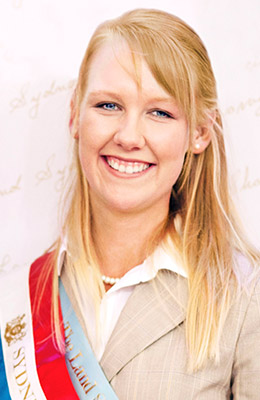 What started as a way to meet people in her new home town turned out to be a once-in-a-lifetime experience for 2014 The Land Sydney Royal Showgirl Brodie Chester.

The 21-year-old, who moved to the Bega Valley from Cootamundra 18 months ago, was announced as the competition's winner at the Sydney Royal Easter Show ahead of 15 other state finalists. Nicknamed the 'crazy cowgirl' by her fellow contestants, Brodie says the competition is all about being passionate about your local area and the work that you do.

"Your background doesn't necessarily have to be in agriculture; one of the girls was a beautician, we had lawyers and doctors; but all of the women competing in the Showgirl event were definitely passionate about the rural sector, and promoting rural life and their local communities as best they could."

Brodie, who runs a 250-head dairy herd in the NSW South Coast town of Bega with her partner Kevin, also studies Agricultural Business Management part-time. She believes it's important for the industry to recruit young people from farming and non-farming backgrounds to ensure the sustainability of Australia's various agricultural industries.

"I grew up in Cootamundra [South Western Slopes region of NSW] but it wasn't until I started showing beef cattle with my high school that I became involved in agriculture. That was my stepping stone into the industry and got me interested and into junior judging. Then I did work experience at a farm in Bega in Year 10, which sparked my interest in dairy.

"If I hadn't had that exposure to the industry through school I may not have got involved in agriculture." 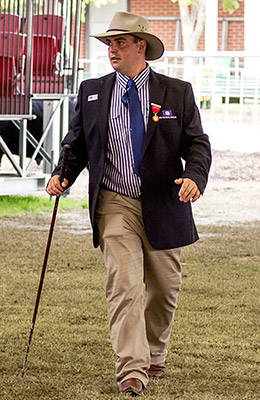 Like The Land Sydney Royal Showgirl competition, the RAS Rural Achiever program has a long and distinguished history of fostering future leaders.

"I am grateful for the opportunities being a Rural Achiever has provided and I hope to use it to encourage more young people to get involved in this rewarding industry," Samuel says.

"The Rural Achievers program allows young people like myself to network and get advice from people who have gone before us."

Samuel who grew up in Sydney, works for the Ben Nevis Angus stud and, together with his partner Jodie, operates both the Kawana Lea Shorthorn stud and a commercial herd of 250 head of Angus on a 607-hectare leased parcel of land at Walcha (on the Southern Edge of the NSW Northern Tablelands).

"It's a bit different to where I grew up; there wasn't much lawn at home-out here you can't see your neighbours," the 24-year-old says.

Samuel is looking forward to the opportunities his new role as New South Wales Rural Ambassador will provide in promoting Australia's agricultural industry.

"Over the next 12 months, I'll be helping to foster the enthusiasm of the youth at the local shows … helping to facilitate them getting into the Rural Achiever program and [to] further develop their passion for agriculture"