The Art of Winemaking

When Robert O'Callaghan launched Rockford Wines on a run-down farm outside Tanunda, everyone thought he was mad. Three decades later, his model of sustainable boutique winemaking is widely respected.

On any given morning, the picturesque courtyard at Rockford Wines is a hive of activity. During the harvest from February to late April, workers haul buckets of grapes to large oak fermenters. The first visitors crowd into the tiny cellar door.

Robert O'Callaghan, the man behind Australia's original and, some would argue, most influential artisan winery, emerges from a low-slung stone building like the captain of a ship on the lookout for tempests. Having grown up on a soldier settlers' block in the Riverland, O'Callaghan, 67, has a farmer's instinctive sense of caution, but today he's in an expansive, jovial mood. A long, cool autumn has produced immaculate fruit, so 2014, his 30th vintage at the helm of Rockford, has all the hallmarks of greatness.

The art of winemaking"It's been a long time since we've had a ripening period this slow and this perfect," he says. "Conditions have been spot-on since the rain broke the heatwave earlier this year-you couldn't get it any better. It's wonderful, absolutely wonderful."

Although Rockford has several small vineyards along Krondorf Road, just outside Tanunda, most of the fruit is sourced from small family-owned grapegrowers-a partnership that O'Callaghan treasures.

"I'm using the same fruit from the same vines every year," he says. "Many of these growers go back five generations. Part of my commitment to traditional winemaking in the Barossa is to make sure these grapegrowers remain viable because they are the viticultural key to this region."

While much has been written about Rockford's use of recycled farm machinery, open fermenters and a basket press to crush the grapes, the winery's commitment to traditional Australian winemaking techniques is evident in every aspect of production, from picking to retailing.

Unlike modern, highly mechanised winemaking facilities, almost everything at Rockford is done manually. Many of the oak barrels are still stored on traditional wooden chocks and moved gently around by hand.

Our vineyards are hand-pruned, hand-picked and shovelled out by fork, and our grapes are put into the tank by hand, pressed by hand and racked by someone who's skilled at that.

Rockford's approach to marketing and distribution is equally individualistic. O'Callaghan avoids distributors and big retail chains, selling direct to customers by mail order or in person at the cellar door. He does not advertise, enter wine shows or solicit the opinions of wine writers.

"Building that loyal client base took a very long time," he says, "and they are vital to everything we do here." 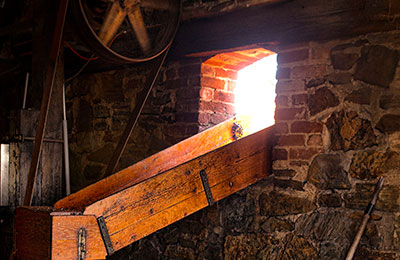 Three decades ago, as a penniless young winemaker, O'Callaghan made the bold decision to build a sustainable wine company based on low volumes, a small but loyal customer base and incremental growth. His inspiration came from visiting a traditional sake house in Tokyo.

"The first time I walked into one of those places I thought, 'There's a message here that if you do this properly and make distinctive high-quality wines with integrity, there will be a market for your product forever,'" O'Callaghan recalls.

The enduring popularity of Rockford Basket Press Shiraz is evidence that his instinct was correct. Today, Rockford concentrates on established Barossa varieties such as grenache, mataro and shiraz, although it has chosen alicante bouschet, a boutique French grape variety, for its light and refreshing rosé.

"The whole world has been industrialised and digitised. Good-quality handmade things like porcelain, food, clothes and wine are becoming rarer," says O'Callaghan.

So, while much of the industry has moved towards mechanical harvesting, Rockford is one of the few wineries to employ its own team of expert pickers. Despite Australia's high-wage system, O'Callaghan says this old-school approach helps to maintain fruit quality and actually protects the growers' income in a difficult year.

"Because we've trained them ourselves, our pickers are grading the fruit out there in the vineyard," he says. "In a rain-affected year they can rescue fruit that would otherwise have been lost."

While the success of Rockford owes much to O'Callaghan's non-interventionist winemaking style, adherence to traditional winemaking techniques and reverence for the Barossa's rootstock, it is his deep and unambiguous sense of belonging that sets him apart.

"Rockford today, with its farm courtyard and traditional stone buildings, is exactly how I imagined it would look when I bought the joint all those years ago," he says.

Ever the visionary, O'Callaghan wants Rockford Wines to survive in its present form long after he has left the stage-hence the appointment of Barossa winemaker Ben Radford as Managing Director in 2012.

"I want people who walk into this courtyard in 100 years' time to have the same sense of continuity I experienced in that little sake house in Tokyo," he says. "The sense that this place has been here for a very long time doing things in exactly the same way-that's what pushes me on."