Need help setting up Biz Invoice? Get help in our frequently asked questions.

Overview and set up

View an example of Biz Invoice 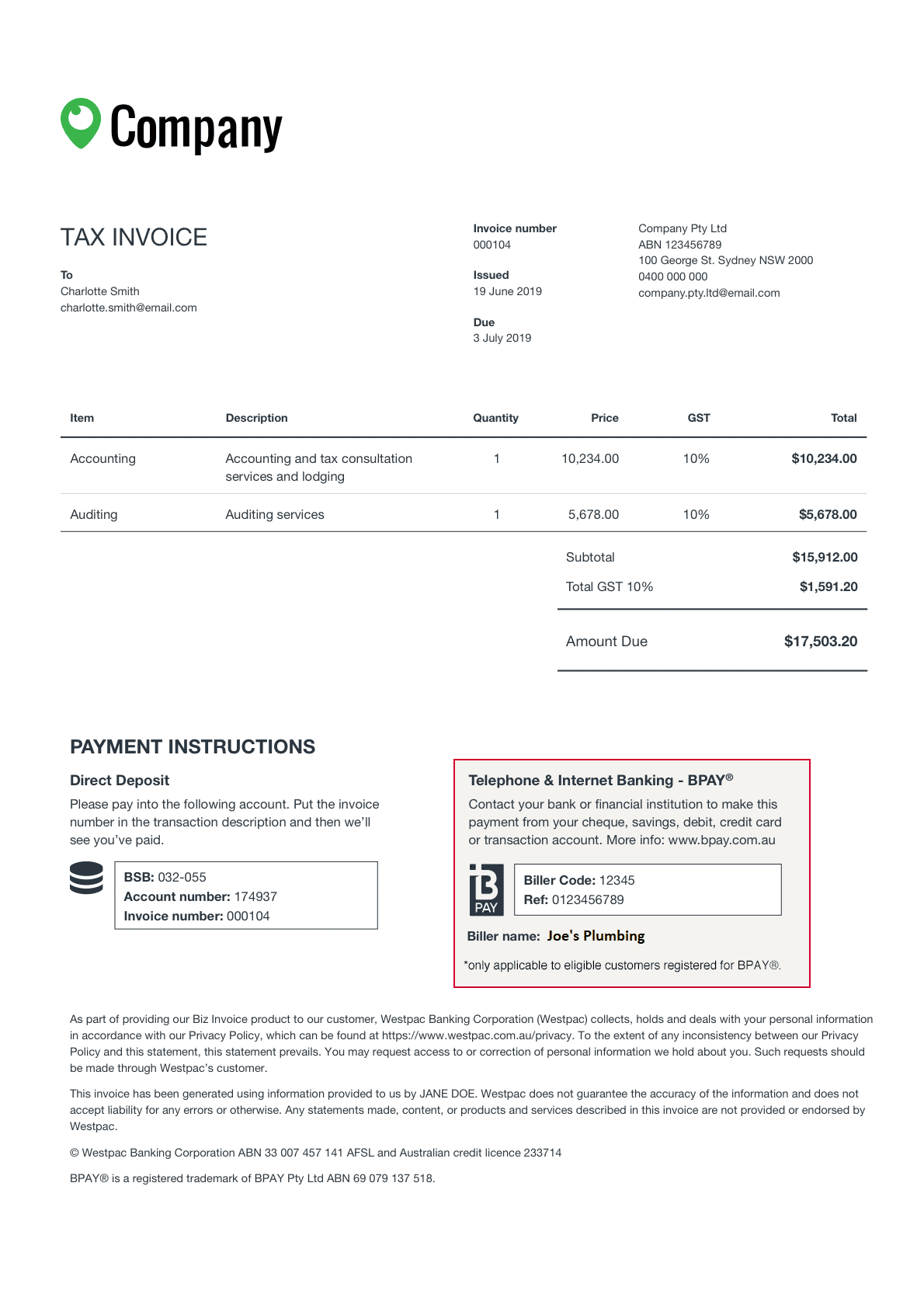 Who is eligible for Biz Invoice?

Biz Invoice comes with Westpac Business One High, Business One Low and eligible foreign currency accounts for new customers, and has been provided to all existing customers. In order to use Biz Invoice, customers or Users in a Business Network will need to have completed a Westpac identity check and the owner of the account must have an Australian address registered on their Westpac Live Online Banking profile.

What happens to my invoices if I close my eligible account?

If the account Biz Invoice was set up with is closed, you will no longer have access to any of the invoices generated in Biz Invoice via Westpac Live Online Banking.

It is recommended to download all the invoices generated in Biz Invoice as PDFs before closing the account to avoid losing historical invoicing data.

What name does Biz Invoice use on invoices it generates?

Biz Invoice will use the name of the account owner on your invoice template. In addition, you can also have your Trading Name displayed on your invoices. You can set this in the first-time setup or under the Settings tab in Biz Invoice. A trading name will appear in addition to the primary account owner’s name on all invoices created once set.

My business address has changed, how can I update this to reflect on my invoices?

You can update the registered business address to appear on your invoice template via Westpac Live.

When logged into Biz Invoice, head to Settings and click Edit at the bottom of the page.

Update your address in the relevant field then submit Save.

Note: This will not update your address registered with Westpac. To update your business address, find out more.

Can I display or hide my business address on my invoices?

Yes. To show or hide your business address on the invoice, select Settings then Edit Settings at the bottom of the page. Select yes or no then save changes. This will apply to all invoices created going forward once that preference has been set. It will not change already sent invoices.

How can I change my ABN number that is displayed on the invoice template?

From Biz Invoice, head to Settings and click Edit Settings at the bottom of the page. Update your ABN then submit Save. An ABN is required to send invoices with GST.

Yes, if the eligible account is jointly owned Biz Invoice is available to both owners to access and use via Westpac Live Online Banking.

How secure is using a URL link to the invoice portal in an email?

The Invoice URL link contains a random 32 character identifier, which is unique to each invoice created for Biz Invoice, making the URL difficult to guess.

What if my invoice recipients are concerned with hoaxes or scams when clicking on emails links from a 'Westpac email address'?

Reassure them that Westpac will never send an email asking for sensitive financial information or link directly to a sign-in page.

To improve your safety, keep your system up to date. For more information visit westpac.com.au/hoaxemails.

Can I generate a report for all payments made through Biz Invoice?

Yes. You can generate a report of all invoices where payments have been automatically or manually reconciled. It will be exported as a CSV file only. Do this by selecting the Reports tab at the top of the Biz Invoice Tool and follow the screen prompts.

Is there a limit on the number of customers or goods and services that can be added in the tool?

There is no limit on the number of customers or goods and service items that can be added to the profile.

Is there the ability to add my businesses own Terms and Conditions for example – Product return policies to the invoice?

Yes, this can be done each time the invoice is sent out via the Comments section in the email confirmation. For example, including a link to the website with your returns policy.

What currencies can I invoice in?

What are the payment options for foreign currency invoices?

Foreign currency customers can pay an invoice using the bank account details on your invoice.

Is there a way to apply a discount on goods or services?

Yes. When adding an item to your invoice you will have the option to add a discount to an individual item in that invoice. Future invoices will not automatically have the discount applied to that item. You will need to apply the discount for each item each time as necessary.

What address does a Foreign Currency invoice recipient need to enter to make the payment?

Can I change the due date for the invoice?

The options for Due Date on an invoice are Today, 7 days from issue, 14 days, 30 days, 60 days and 90 days. There are no other due date options that can be displayed.

How can I start issuing invoices from a specific invoice number?

To start Biz Invoicing from a specific number, head to Settings and select the invoice number you would like to start on, if available. Then all new invoices are incremented by 1.

Invoice numbers cannot be changed on an invoice to invoice basis.

How does Biz Invoice auto-reconcile invoices?

Biz Invoice profiles linked to a Business One Low or Business One High account will match the Invoice ID used in the customer’s payment description field back to the invoice. Invoices are only auto-reconciled if the proper Invoice ID is included; the Invoice ID included is complete and correct; and the amount paid does not exceed the total unpaid on the invoice. Invoices cannot be matched by customer name or amount.

A payment has auto-reconciled to the wrong invoice, how do I amend this?

Can I see total amounts paid for periods more than the last 30 days?

Currently, the Biz Invoice dashboard only provides you with the last 30-day snapshot of total amounts paid and cannot be amended to reflect longer periods.

Additionally, Biz Invoice offers a report on all your reconciled invoices from your first reconciled payment until the date of the report. Find the report from the Reports tab, select download CSV and the Reconciled payments summary report will be in your downloads.

What email address does the emailed Biz invoice come from?

The email address used to set up the Biz Invoice template is the one that will appear on your invoices. It can be managed in Settings.

How can I notify the customer about an overdue Invoice?

From the Invoice screen, select the invoice you would like to send a reminder for under the ‘More Actions’ drop down, select send reminder.

You can set up Biz Invoice to automatically send reminders if an invoice is overdue.

When creating your Biz Invoice, toggle Yes for ‘Auto send payment reminders’ and reminders will be sent every 3, 7 and 14 days after the due date unless paid.

For more help, refer to our ‘Resend, remind and cancel’ Biz Invoice Video

How do I get Biz Invoice to remind my customer their invoice is due automatically?

When creating your Biz Invoice, toggle Yes for ‘Auto send payment reminders’ and reminders will be sent every 3, 7 and 14 days after the due date unless paid.

For more help, refer to our ‘Resend, remind and cancel’ Biz Invoice Video

How can I share a URL of an invoice?

Each Biz Invoice you create has a unique URL, which you can copy and send to customers via text message or email. Once on the Biz Invoice dashboard, select Invoices and select the one you want the URL of, then in the ‘More options’ menu select Copy URL. You can now paste the URL into an email, text message or WhatsApp® message. See full guide

Can I pay a Biz Invoice using AMEX?

How do I set up BPAY on my invoices?

Sole Trader Biz Invoice profiles linked to a Business One Low or Business One High account will be able to register to become a BPAY sub-biller. Once on the Biz Invoice dashboard, select Settings and Edit settings and hover over ‘BPAY’ to open a BPAY account. The registration process can take up to 10 business days, after which your BPAY details will appear on any new Biz Invoices you generate. See full guide.

How do I remove BPAY from my invoices?

Once on the Biz Invoice dashboard, select Settings and Edit settings and click on ‘CLOSE BPAY’ to close the BPAY account. Once you’ve done this, any future invoices you create will not feature BPAY details. However, past invoices will still provide the BPAY option. See full guide.

What happens when I close my BPAY then choose to register for BPAY again?

If you close your BPAY Sub-Biller account, you will have the option to register again, however your Sub-Biller code will be different to the previous one.

Short 'How to' videos

Overview and set up

Give us a call

To be eligible for Biz Invoice you must be registered for Online Banking and hold a Westpac Business One Low Plan or Business One High Plan or Foreign Currency Account (excluding the Chinese Yuan RMB foreign currency account).  Terms and conditions, fees and charges apply in relation to the above accounts.This information does not take your personal objectives, circumstances or needs into account. Consider its appropriateness to these factors before acting on it. Read the disclosure documents for your selected product or service, including the Terms and Conditions or Product Disclosure Statement for Westpac's Online Banking facility, Business transaction accounts and Foreign currency account (PDF 158KB), before deciding.

BPAY Eligible Account Holders: To be eligible to set up BPAY Payments with Biz Invoice you must be registered for Online Banking and be a Sole Trader who is the sole owner of the Westpac Business One Low Plan or Business One High Plan account to which Biz Invoice is linked. This information does not take your personal objectives, circumstances or needs into account. Consider its appropriateness to these factors before acting on it.  Read the disclosure documents for your selected product or service, including the Biz Invoice BPAY Sub-Biller Agreement Terms and Conditions (PDF 104KB) and Direct Debit Request including the Direct Debit Request Service Agreement (PDF 36KB), before deciding.  Terms, conditions, fees, charges and eligibility apply. Full details are available on application.