From footy fan to changemaker

“As a lifelong Melbourne supporter, Jim was one of my heroes growing up, so I was curious to find out more,” says David. Intrigued, David decided to join fellow Westpac colleague, Merran Schoeffel at a REACH fundraising breakfast and was immediately drawn to get involved. 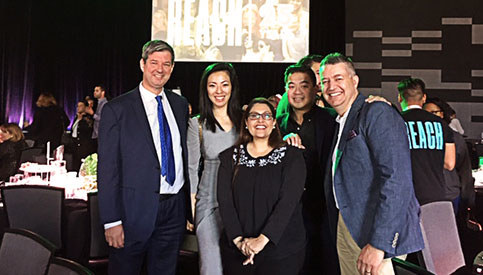 “REACH play a really important role in helping young Australians by breaking down barriers to help them understand themselves and others better and the impact is so direct,” says David. “What makes the programs so effective is that the workshops are 100% designed and delivered by young people.”

“Our stretch goal was to raise $7,000 to fund two young people to attend a mentoring camp and we were blown away with the support from the whole team,” says David.  Team members baked cakes, organised morning teas at Westpac’s regional offices in Mt Waverley, Tullamarine and Bundoora, and donated items for gift baskets which were then raffled.

A camp to remember

In addition to fundraising, David volunteered at REACH’s annual 1000 faces camp as an adult guardian a few years ago, an opportunity he heard about through Westpac Foundation, who has long-supported REACH as part of their Community Grants program. David was so moved by the experience that he encouraged two team mates, Carlo Colangelo and Priya Savania, to do the same.

“I got so much out of participating at the camp,” David says, “And I really wanted to make sure that those who worked hard on the fundraising were able to experience first-hand what the funds were going towards.”

Priya agrees, saying that her experience as an adult guardian was simply amazing: “To hear the young people’s stories of resilience, allowed me to walk away with a fresh outlook on life, equipped with new strategies and above all, a new sense of freedom, acceptance and purpose.”

David agrees, “It’s not an exaggeration when I say that it was a life-changing experience. I was thrilled to be a part of it and so glad to continue to promote the great work REACH does with my colleagues and beyond.”

For more information on REACH Foundation and their 1000 faces Camp visit: https://www.reach.org.au