People who know me know that I am a little bit obsessed with data.

I have been around it for a long time across multiple different industries  –  originally in telecommunications, then media and ecommerce and more recently in financial services and fintech.

The breadth of applications I have seen have given me some perspective on how pervasive and consistently powerful data is within a business, but it wasn’t until I got exposed to the potential of cross-industry connectivity through data that I really understood just how powerful the potential of data was.

In a lot of fundamental ways, the emerging data industry has a lot of the same characteristics as the financial services industry.

If you substitute the concept of money for data, you can immediately see the parallels. As we move to a cashless economy, money is just data with a single application.

The infrastructure we need to enable its movement and security is highly analogous  – banking infrastructure for data. Money and payments are an element of every industry vertical but also an industry in their own right, just like data.

The greatest utility of money occurs when we have real-time, frictionless flow built on a foundation of inherent security, privacy, trust and governance, just like data. Money is neither inherently good nor evil  –  it is its application that determines its morality, just like data.

Money can be used to create leverage in an economy, but only to a certain extent before it becomes toxic.

And here is where we see the biggest departure from data. A single data product or algorithmic insight can be leveraged again and again in multiple different applications, industries and contexts with no limit on the upside that can be created.

Financial services is an inherently regional industry, largely due to regulatory structures. Data, for now, is less encumbered by regulatory frameworks. That is beginning to change however as we see different jurisdictions begin to take different approaches to the emerging data economy.

China is allowing a thousand flowers to bloom with incredible innovation as a result. The European Union has kicked perhaps the world’s biggest regulatory “own goal” with General Data Protection Regulation. Many other markets are developing their first ever privacy framework and battling with the same privacy versus innovation trade-off that all markets now face.

The markets that take a long term, holistic perspective on the potential of the emerging data economy and develop a considered strategy and policy framework to ride that wave will benefit for decades to come.

This is an opportunity that, for once, Australia is at the front edge of and can lead rather than follow. To do so, we will need a co-ordination and amplification of our efforts, investments and regulatory frameworks.

Given that data is the fuel upon which the artificial intelligence engine is built, the foundations we lay down here have material implications for the development of our local AI industry as well.

This report fully captures my thoughts on the emerging data economy and Australia’s place in it.

To summarise, the open data opportunity, while in its nascent stages globally, is already predicted by McKinsey to generate in excess of $3 trillion in economic value annually across major industries, solely based on the impact of availability of data alone.

And after four years working at the centre of Australia’s fintech community, it’s clear the upside is immense.

In fact, it’s my deeply held belief that data is the single biggest lever for microeconomic and social reform in the next two decades, and needs to be a material part of policy and trade consideration at all levels of thinking in the public and private sector.

The policy landscape relating to data is already shifting, including the Consumer Data Right, Open Banking, Open government data and Digital ID. As for the regulatory framework for data, it’s largely legacy and lacks co-ordination with no clear accountability across multiple different bodies or government departments.

Regardless, Australia is well-positioned to disproportionately gain from the emerging data economy by virtue of its balanced perspective on privacy versus innovation, oligopoly market structure (which can be harnessed for at-scale execution more easily), proximity to Asia and considered approach to policy development.

The key is breaking the core challenge most markets are facing: the unconscious trade-off between privacy and innovation, which can be imagined as two ends of a seesaw being tilted one way or the other. 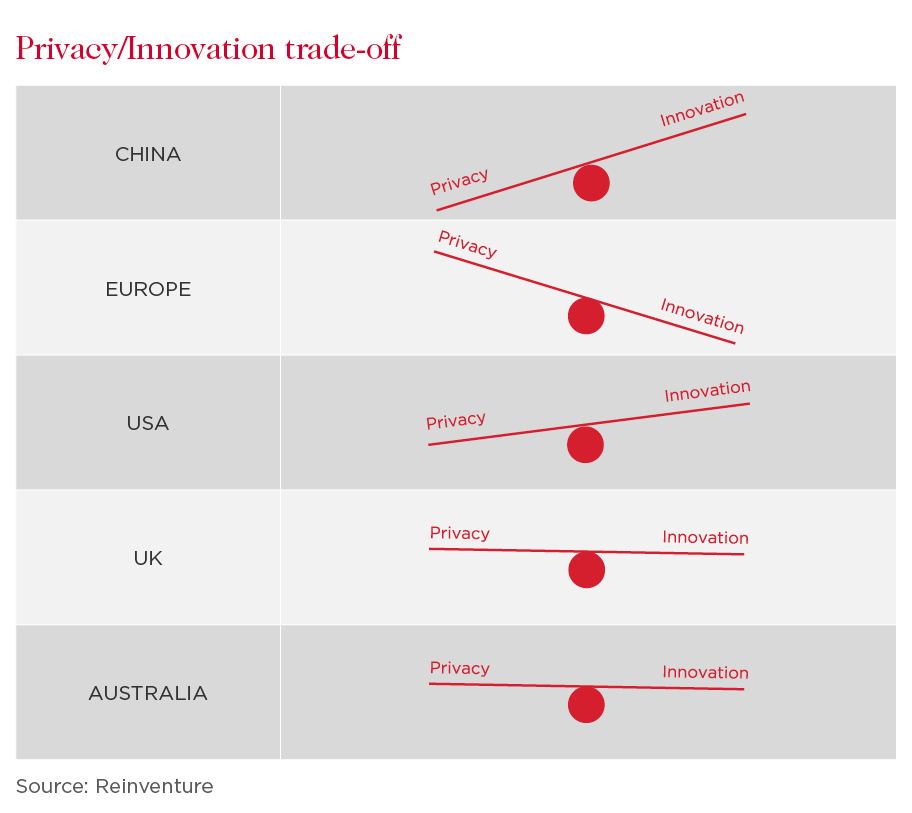 This see-saw can be broken, and will also solve for the balance between consumer and corporate rights relating to data.

First, we must develop a 10-year national strategy to be a global leader in the emerging data economy, similar to the UK’s approach to fintech and Israel’s in relation to Cybersecurity.

Second, a single statutory body responsible for the considered development of the data economy – like a “RBA/APRA for Data” – should be created, led by a Chief Data Officer for the nation. This body needs to be given a long term, bipartisan mandate and should be considered as important as The Australian Prudential Regulation Authority or The Reserve Bank of Australia.

Third, we need to develop core principles across the public and private sector to minimise the amount of personal information (PI) in the data economy and have shared, decentralised security protocols for managing PI access and storage.

Other important and related initiatives include connecting all data-related policy to the national strategy, world’s best practise policy and legislation, public-private collaboration, and increasing the focus on “data for social good”.

Australia is well-positioned to win. But the enabling environment plays a critical role in ensuring how well this opportunity is leveraged for the local and regional economy.

Danny is co-founder and managing director of Reinventure Group, a $150 million venture capital fund that backs entrepreneurs leading disruptive technology ventures. He is also co-founder of Data Republic – a secure data exchange platform venture; and founding director of Stone & Chalk – an independent not-for-profit hub to help foster world-leading fintech start-ups in Australia. As both a serial entrepreneur and venture capitalist, Danny is at the forefront of driving disruptive innovation in Australia’s financial services sector.