Water saving across the globe

We reveal some of the most innovative and affordable water-management tools and technologies from around the world.

Much of Australia’s agricultural land suffers from inadequate supply of water. And we’re not alone. Water availability has become a global crisis, forcing governments to act and agriculture to innovate. So, what can we learn from other countries operating in drought or water-scarce environments? We’ve scoured the globe for ingenious, affordable water-management tools and technologies, and it’s heartening to see how much is out there. Here are some of the innovations you might want to investigate as you plan for a hotter, drier future.

Forward Thinking Architecture’s self-sufficient Smart Floating Farms (SFF) are a prototype right now, but they could be the future of farming.

“A floating-platform multi-layered strategy which combines aquaculture (fish), hydroponics-aeroponics (crops) and photovoltaics … the SFF can be located close to areas where food is needed and can potentially become automated ‘farm clusters’ run by IT technologies/software, its Barcelona-based developers explain.”

Each 2.04km2 SFF has three levels—fish farm, tiered hydroponic garden and rooftop solar panels—all feeding into one another in a sustainable loop. PV panels power the floating barge. Wastewater from crops filters down to the fish farm as food, while nitrogen-rich, fast-acting fish manure is recycled as crop fertiliser. Water is 100 per cent recycled within the closed system. Potential additions include desalination plants, fish-processing facilities, and wind and wave turbines.
The company estimates each SFF could produce about 7.3t of vegetables and 1.5t of fish per year with minimal inputs. 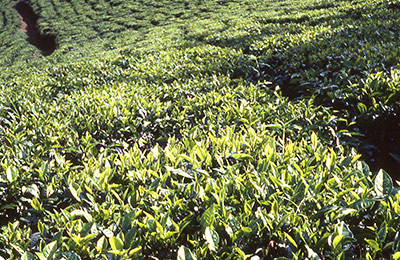 Stabilised silicic acid-boron compound NewSil, which won a Securing Water for Food Innovation Award in 2015, makes it possible for plants to absorb the only bioavailable form of beneficial mineral silicon, enabling them to produce more food using up to 50 per cent less water.

Developed as a human food supplement, SiWell, and later modified for use as a foliar spray, NewSil has benefits to plants that go beyond saving water. Even in tiny amounts of about 16ppm (parts per million), the safe, silicon-based fertilizer “showed highly positive effects on the metabolism of plants”, its makers say, causing them to take up more nutrients more efficiently and increasing crop yields by 20–50 per cent.

The Buried Diffuser, a subterranean irrigation system developed by Tunisian company Chahtech, enables farmers to inject water into the deep soil layers and conserve it until it is needed.

The multi-award-winning technology delivers water to the roots of plants far more efficiently than existing irrigation methods. It requires less than half the water of drip irrigation systems but gives three to five times the yield, it loses zero water through evaporation and it saves on energy and fertiliser.

The Buried Diffuser is inexpensive and simple to install and use and it’s suitable for trees, shrubs and vegetables in paddocks and greenhouses.

Substances that can absorb many times their own weight in water and store it safely for future use by plants are exciting news for water-strapped farmers.

Award-winning Solid Rain, developed in Mexico more than a decade ago but released onto the US market only in recent years, has an enormous capacity to absorb and store water, reducing water consumption dramatically while vastly improving plant growth and yield.

A highly absorbent polymer known as potassium polyacrylate, Solid Rain soaks up huge amounts of water, expanding to up to 500 times its original size. Just 10g can absorb a litre of water, converting it into a thick gel that’s retained for up to a year—not evaporating or running off into the soil—until needed by plant roots. It’s also available in powdered form.

Meanwhile, Waterpads is brand-new technology developed in Ethiopia and Turkey, netting its creators a Securing Water for Food Innovation Award in 2015.
The patented biodegradable polymer wrap, which can absorb 100 times its own weight in water, is low-cost and eco-friendly. It promises to greatly enhance water efficiency in developing nations.

The greenhouse traps hot air and humidity by day, creating ideal conditions for plant growth. At night the top is opened, allowing cool air in, which condenses once it reaches the ‘dew point’. The water droplets are channelled into a collection cistern to be used for irrigation or drinking.

But it’s not the only dew collector out there. In 2009, Israeli company Tal-Ya Water Technologies developed a low-cost, re-usable serrated plastic tray that surrounds a plant to collect dew overnight and funnel it to the roots. “If it rains, we can amplify 1mm of rain so that it equals 27mm,” said the tray’s inventor, Avraham Tamir. In trials the trays have been shown to reduce crops’ water usage by up to 50 per cent.

Last year, however, researchers from Egypt’s Alexandria University announced a way to purify sea water using cheap, easy-to-manufacture materials and a method not reliant on electricity.

The new technology uses pervaporation, a simple process for separating liquids from solids that entails filtering the liquid through a ceramic or polymeric membrane, then vaporising and collecting the condensed water. Pervaporation is faster, cleaner and more energy-efficient than traditional desalination methods but, until now, the cost of fabricating suitable membranes had made it financially unviable. The new system relies on a salt-attracting membrane embedded with cellulose acetate powder derived from wood pulp, which can be cheaply and simply made in any lab, researchers claim.

The innovative membrane can capture pollutants and salt crystals, purifying even highly concentrated and contaminated sea water quickly and effectively.

In off-grid locations it can use fire for vaporisation.

For more inspiration, check out the latest crop of winning water-saving innovations at Securing Water for Food: securingwaterforfood.org