Field Air's pilots, who fly aircraft that spray crops and engage in firebombing operations, are a cut above the average.

Imagine what it takes to fly just 1.5 metres above the ground, assiduously avoiding trees, powerlines and hills, or to fly directly into the path of a raging bushfire to douse an uncontrollable blaze. That's exactly what pilots do when they work for agricultural aviation group Field Air.

Field Air has been a leading operator in agricultural aviation since the company's inception in 1963. From its Ballarat head office in regional Victoria, Field Air has evolved into one of the largest businesses in the industry and its contribution to Australia's agriculture sector and firefighting services is widely acknowledged.

Reflecting on the company's early days, Managing Director Peter Mackay says it was his father's background in agriculture that led him to establish a small fleet of aircraft to fertilise and spray crops. Initially, Mackay Snr discouraged his son from joining him, but when sickness slowed him down he invited Peter, who was then in his 40s, to start learning the ropes. "Dad had laid an excellent foundation," Peter recalls.

Peter has now been with the company for more than 20 years. Diversification has seen the business grow exponentially. Field Air is the Australasian dealer for Air Tractor, the world's leading agricultural aircraft. Over the past eight years the company has sold aircraft to China, Malaysia, Indonesia and New Zealand. 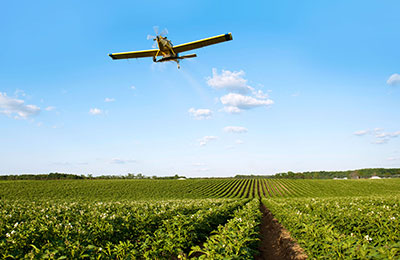 Peter has extended Field Air's aircraft maintenance business and increased its focus on training, but the heart of the business remains its fleet of 12 to 15 aircraft. Peter maintains that the company's success can be attributed to the quality of its fleet and the calibre of its pilots.

Aerial application (of liquids, solids and pest control) for the agriculture sector is the company's core business, as managed from its bases in Ballarat and the Riverina. Firebombing is a significant adjunct. Four of Field Air's Air Tractor AT-802 advanced firefighting aircraft are contracted to Victoria for a minimum 84-day period in summer. Another Field Air AT-802 is available for use in Tasmania.

"The Air Tractor we use has a 3200-litre fire-suppressant capacity. It's the largest single-engine air tanker available for use in firefighting on the world market," Peter explains. A fixed-wing aircraft is generally more economical than rotary-wing because helicopters don't carry the same load-the exception being the firefighting air-crane helicopters that can hold 9500 litres of water or foam mix.

Peter predicts the trend towards larger aircraft with greater capacity will continue. In conjunction with a partner company in Canada, this season Field Air is bringing in a large air tanker that carries 12,000 litres of fire suppressant and travels at 750km/h. Speed and capacity are vital elements in firefighting.

Its role as the Australasian dealer for Air Tractor has helped Field Air establish its position and reputation, but Peter says the key is his team-in particular his pilots. "When we want to add a pilot to our business.."

"We look for someone who has a passion for aviation, a total enjoyment of the job and a desire to relate well to our customers. It takes a special person to fit that mould, "

he says. "Our pilots absolutely love flying. Quite often they were involved with model aeroplanes as kids and developed their passion from that.

"They tell me that agricultural aviation and firebombing give them a strong connection with the aeroplane. It's not just a matter of pressing buttons; they're totally in control of all the aircraft's movements, which comes from 'flying by the seat of their pants'."

Peter equates the experience with Formula One racing: "Formula One drivers say they feel at one with their cars. Our pilots feel that way about their aircraft."

The risk factor inherent in low-level flying and firebombing is something that his pilots live with, he says. "They are very aware of it and put in the appropriate margins of safety."

Focused discipline is a fundamental aspect of the safety culture. One of Peter's pilots told him, "When I shut the cockpit door I close off everything except my immediate environment. I leave all other aspects of life outside."

There's no doubt the job is physically and mentally demanding and requires a strong level of commitment. "The main thing about this industry is its absolute reliance on teamwork," Peter says. "It's not a 9-to-5 industry and each one of the 50 people who work in our business helps to build a really strong safety and work-hard culture. Each one of them is exceptional."

In Australia, aircraft began to be used for crop dusting in 1947. By the late 1970s the US-manufactured Air Tractor, which is widely used for aerial agricultural operations today, was introduced to Australia.

The role of aircraft in Australian firefighting operations has significantly increased since the 1960s. In particular, the role of fixed-wing and rotary-wing aircraft is now integrated within the overall bushfire management strategy.