The MLA Challenge winner has been decided and, after a year of hard work, all challengers have successfully made improvements to productivity and profitability.

Tasmanian sheepmeat producers John and Annie Ramsay were announced as the winners of the inaugural Meat and Livestock Australia (MLA) Challenge.

The Ramsays run a 14,000-head flock of merino and composite sheep on the 2800 hectares of their two properties in Bothwell and Dysart, Tasmania. Under guidance from their mentor and using MLA's productivity tools, they transformed and improved their business over 12 months to propel themselves into first place.

including moving away from merinos, changing lambing dates and reducing haymaking. They changed to crossbred ewes, increased their flock by 2000 head, and brought in spring lambing and a simplified system producing more meat per hectare. This brought about an increase in production: 30 per cent more lambs with the potential to earn the Ramsays an additional $75,000, which is a major improvement. 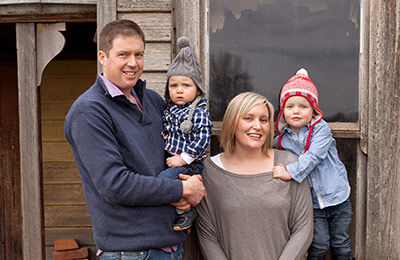 The MLA Challenge rated the challengers' success by their ability to improve efficiency, productivity and profitability within their farming operations. Challengers had to measure their current farm performance, identify opportunities for improvement, set goals and plan to effect change.

They were also required to record their journey and report regularly on their progress to the wider agricultural world using digital and social media. Each participant wrote regular blogs in real time for the MLA Challenge website, gaining followers as the year progressed. Twitter, new to most of the challengers, was another means of communication.

Each challenger had advice from an agribusiness consultant and a mentor, which resulted in fundamental changes being made to improve each business. Among the MLA tools used most by the challengers were the stocking rate calculator, the feed demand calculator, and the 'making more from sheep' and 'more beef from pastures' modules.

Andrew and Megan Miller, beef producers from Windorah, Queensland, won the people's choice award, as voted online on the MLA website. They run a self-replacing 1000-strong herd of Droughtmaster-cross cattle on their 28,328-hectare property. The Millers said their biggest achievement has been "shifting to a whole-of-business approach [where] our decisions are well researched, informed and defendable".

In Amelup, WA, Marcus and Shannon Sounness run 3000 hectares of mixed cropping and 3000 breeding ewes. Using the cost of production calculator and taking advice from their mentor, they changed their focus to increasing production per hectare rather than a high dollar-per-head market.

By far the biggest change was experienced by Shannon, who began the MLA Challenge as "an outsider looking in" and ended it feeling like "a full partner"
in their business.

Beef producers Matthew and Angela Pearce from Adelong, NSW, run a self-replacing autumn calving herd of 300 Hereford/Angus cattle on their 560-hectare property. Matthew says, for him, "the critical importance of measuring" was the main lesson to come out of the MLA Challenge, but the huge boost to the family's motivation and confidence was equally important.

"The MLA Challenge has really made us think about why we're [farming] and what we want to achieve," he says. 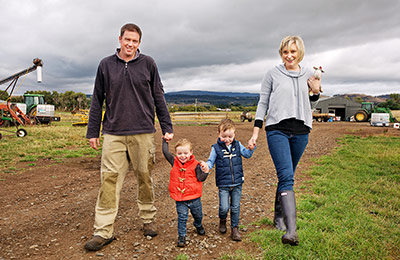 Beef producers Bill and Georgia Wilson run 250 Angus/Charolais and Speckle Park cattle on 185 hectares at Edi, Victoria. After a year in the MLA Challenge, they have adjusted their calving pattern and intensified their rotational grazing system. Their most important outcome has been understanding and measuring the cost of production. "Before, we knew what we made when the cheque came in from the cattle, but that was it," says Bill.

Challengers Lachlan and Anna Hughes run 7000 Angus-cross cattle over four Queensland properties near Clermont and Capella, in the north, and Dulacca, in the south. After a year in the MLA Challenge, they have feed on offer for next year, increased cattle numbers and drought plans in place. They have also implemented a good monitoring system. The most important outcome has been "understanding the impact of efficiencies on the business, and accepting what couldn't be changed, such as prices and weather".

Jane Weatherley, R&D Communications and Extension Manager at MLA, said the final scores of the six challengers were very close, and all have shown what Australian producers can achieve when they use the tools and resources available to them.