For northern beef producer Peter Britton, the secret to success is hard work, family passion and knowing how to seize opportunities.

Second-generation grazier Peter Britton owns and runs a number of cattle properties in Central West Queensland with his wife Carol and their three children.

The Brittons started out in the 1980s by keeping cattle on Peter's father's property."Carol and I ended up with about 600 of our own cattle at home with Dad, until he told us that we had to leave as we had too many," says Britton in a friendly tone. "So we leased a butcher shop in Boulia that had about 20,000 acres with it."

But it was in 1993 that the opportunity to purchase their first land arose; after the government pulled the floor price out of the wool scheme and killed demand for wool and sheep in Australia, ex-sheep station Fermoy went on the market. Britton jumped on the opening.

"We got a good start then," says Britton, who believes that business success comes from seizing opportunities when they arrive.

"In business, you just can't be attached to anything," he says. "If someone wants to buy something from you, it's easier to sell it to them then, rather than later when you have to sell it. 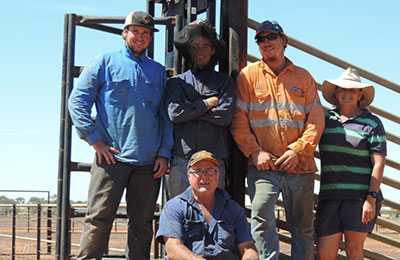 This business approach works both ways. "It's not easy, but force yourself to buy cattle when they're worth nothing, and then sell them when they're at a high price," he advises.

In 1998 the Britton family moved to Mt Landsborough, and in 2011 the family purchased Fairview, about 140km away. But their real luck came in 2013 when Brighton Downs, then a live export property owned by AACo, came on the market when the government's live export ban was in place.

"About two months after we bought it the ban was lifted, and about 4500 cattle went live export from there," Britton says. "It was a great opportunity; the price was right and it's a good place. I'd say it'd be one of the better places on the Diamantina River.

"It's the property we'd been wanting all our lives."

Of course, running a successful grazing business long term isn't all about seizing opportunities; it also requires a blend of hard work, family passion and good sense. Facing diversity head-on has meant the Britton family's beef legacy will continue into the next generation.

"Without my wife, Carol, and my kids, Amanda, Luke and Jerry, I wouldn't be able to run the business," Britton says. "It's a successful business because it's a family business."

"Our optimum goal is selling heavy cattle. That's what we love doing, and we're just going to keep on doing the same."

Would you like to receive a copy?
Or have you got feedback?