World-leading innovations in Australia's fledgling aquaculture industry are set to make a splash in domestic and international markets.

In the pristine Southern Ocean, oysters fitted with minute sensors are monitored for signs of stress. On the Gold Coast, tiger prawns from superior domesticated broodstock grow fat on sustainable, CSIRO-developed feed Novacq.

Aquaponics facilities around NSW are slashing costs and shrinking carbon footprints, while Sydney Fish Market and tuna cannery waste is being recycled as high-protein, low-cost fishmeal.

Australian aquaculture may represent only 0.1 per cent of global production-dwarfed by the 60 per cent from low-cost producer China-but our investment in industry innovations is placing us ahead of the global game by boosting productivity and reducing inputs.

Our industry's focus is on high-value premium products that "are highly regarded in domestic and international markets as being high-quality, wholesome and safe", says National Aquaculture Council Chair Pheroze Jungalwalla, referencing our reputation for clean waters, tight biosecurity and stringent quality controls.

World-leading research and development is, he says, affording aquaculture "the potential to produce seafood with the smallest use of environmental resources of any primary production sector".

"What we lack in quantity, we make up for in quality," contends Sam Gordon, founder of premium seafood marketing agency Blue Harvest. "With demand growing for premium seafood worldwide, I'm optimistic about Australian aquaculture's future." 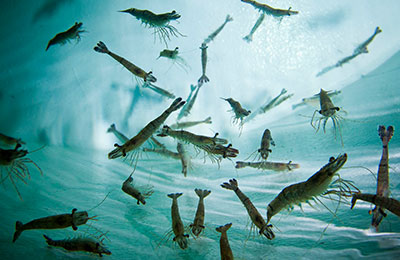 Currently, about half the prawns that Australians eat are imported-which presents significant opportunity for local producers. This potential may soon be tapped, thanks to a long-term breeding program that has fused CSIRO science with prawn farmers' know-how, resulting in domesticated broodstock that produces bigger, tastier, more disease-tolerant offspring.

"The prawns grow faster, survive better and need less feed, so production costs come down dramatically. Over years they've become so tame that you can hold them. They relax, and a relaxed animal feeds better, grows better and, I'd argue, tastes better," he says.

"If the entire Australian black tiger prawn industry adopted the new breeding technology, its value would increase by $120 million by 2020 with no expansion of current production area."

For aquaculture producers, the precise monitoring and timely management of environmental stressors is critical.

Now, a world-first mollusc biosensor developed by the University of Tasmania and CSIRO is being paired with advanced Sense-T technology to help Australia's oyster farmers minimise environmental impact, boost productivity and manage risks. Tiny biosensors attached to credit card-sized electronics boards enable growers and researchers to monitor the creatures' heartbeats and temperature, with a telemetry system feeding biosensor and environmental data into a 'sensor cloud'.

"The project aims to tie together a range of real-time environmental sensing, from salinity levels to water conditions, and present it in one place," says CSIRO Project Leader John McCulloch.

"Incorporating the sensor data into our computer-based management strategy allows us to grade on time and harvest on time," he says.

The technology has "significant applications for the wider aquaculture industry", including abalone and salmon farming, notes Ros Harvey, Founding Director of Sense-T.

Working with Tasmanian salmon farmers, CSIRO scientists have been selectively breeding Atlantic salmon for disease resistance while studying the salmon's AGD-resistant relatives, trout, seeking "genetic clues" as to why this interspecies hybrid tends to survive outbreaks.

Initial results are promising. As AGD has become a costly problem in other countries, CSIRO believes a solution could be worth $1 billion internationally.

Skyrocketing fishmeal prices have sparked a new, lucrative aquaculture industry: sustainable prawn feed. Ridley AgriProducts, a supplier of animal nutrition products, says the cost of fishmeal globally has nearly doubled in the past year, now accounting for almost half producers' input costs. In response, Ridley AgriProducts has developed a sustainable fishmeal from recycled fish offcuts and by-products, which is being trialled at Australian Prawn Farms in Ilbilbie, Queensland.

"Preliminary results show it's 'like for like' with the prawns' current diet," says Australian Prawn Farms' General Manager, Matt West.

Farmed prawns fed Novacq "grow, on average, 30 per cent faster, are healthier and can be produced with no wild fish products in their diet", notes CSIRO Project Leader Dr Nigel Preston. "This means more profit for prawn farmers and less pressure on precious marine resources."

Novacq is boosting production and lowering input costs at farms across Australasia, including Gold Coast Tiger Prawns, a subsidiary of GCMA, which trialled the eco-friendly prawn feed before deploying it commercially this year.

Overseas research also highlights the potential of lupins, which Australia produces in abundance, as a low-cost, nutrient-rich fishmeal substitute.

Aquaponics: barramundi with your salad?

In Cobbitty, south-western Sydney, a $5m, 5000m2 aquaponics complex is growing finfish and herbs together, with minimal inputs and zero effluent. On the 7ha site owned by The University of Sydney, herb beds are linked via a complex system of pipes to tanks housing barramundi.

In 2013, UESA and marketing partner Edison negotiated a five-year agreement with Coles to supply its NSW stores, with an estimated 10 per cent of revenue coming from barramundi. Alongside the university's researchers, UESA is working on using household food waste to feed insect larvae, which can then be processed into fishmeal. UESA plans to export its technology in the near future.

Would you like to receive a copy?
Or have you got feedback?