Ed is a Business Performance Manager who started working with Westpac in 2008. Ed also currently serves with the Royal Australian Infantry as a team leader and trainer.

What is your role in the Reserves?

I currently serve as one of three team leaders (known as “Secos” short for section commander), within an infantry platoon. I have over 10 direct reports who I am currently overseeing their initial training and corp specific training. Additionally I implement and conduct training for the whole platoon (20-30 people) most Tuesday nights. I also hold several other qualifications that see me regularly called up to conduct training and coaching duties in several other disciplines. 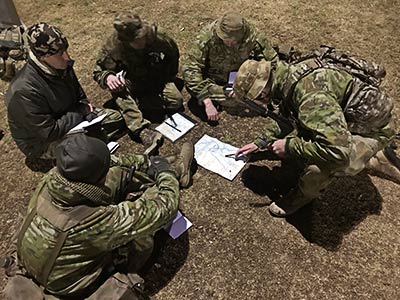 Describe your current role at Westpac and previous roles

Since 2008 (my third time working for St George) I’ve worked in St.George Private Bank as a Financial planning Assistant, I then moved onto a team leader role, from there I became a Crisis and Business Continuity Manager and finally I’m a Business Performance manager.

What are the key skills and experiences you have gained from the Reserves that apply to your work at Westpac?

Some of the strongest traits derived from my ongoing military service are:

Initiative:  When faced with a challenge, the ability to overcome using whatever is at my disposal and not giving up.

Courage: To make a decision, back myself and, stand up for what I believe in even when it is not the “popular” opinion.

Mateship: In everything I do, it is done in order to see my team succeed first.

Respect: For those around me and those in my charge. To respect their diversity and skill levels and finally, respect for myself and who I am, what I believe in and what I can offer.

How do you balance your commitments between the Reserves and working at Westpac?

As an Army reservist, most of my training is on a Tuesday night and the occasional weekend. This actually means giving up family time more often. However throughout the year training is conducted over one or two week periods. This is managed by providing as much notice as possible to my manager. Often times (and similar to training weekends) this will involve leaving work on a Friday afternoon, deploying out field that evening and not coming home until Sunday evening one week later. Then it’s straight back to the office on Monday morning with no downtime. There have been a few times when colleagues have noticed camouflage cream still on me on a Monday morning.

Why should Reservists consider Westpac as a future employer?

Westpac’s values in many ways align with those of the defence force. Westpac also values employees that can think outside the box, can be tasked and trusted to complete the task and not be hampered by road blocks. Westpac also has a long and proud history of employees that have served in most operations the Australian Defence force has deployed on since WW1. Finally, Westpac being community focused, recognises the capability the reserves play in the overall defence of our nation and therefore has a generous leave policy for Defence Reservists in addition to all the other great staff benefits.

We are committed to making it easier for veterans, reservists and military partners to take their next career step with us. Find out more

Search and apply for jobs across all our locations and brands

We will be in touch within 2 working days.

Applying for a role